The morning of New Year's, I went over to Casey's place on the Hill so he could tune my new (used) bicycle a little.

The bicycle is a beautiful thing, when you really look at it. In its modern incarnation, it's that rare product of industrial technology that doesn't appear to be poisoning the world. A mechanism which makes things more humane rather than less. Even in terms of manufacture, though there are surely problems, it requires vastly less in the way of energy and materials than any other practical vehicle I can think of. (Leaving aside items like skateboards, which seem to fall into a different category.)

In the realm of transit, if the "mid-sized" American Sport Utility Vehicle is a cheap inkjet printer with a mostly empty cartridge, then the bicycle is a fountain pen with a built-in reservoir. 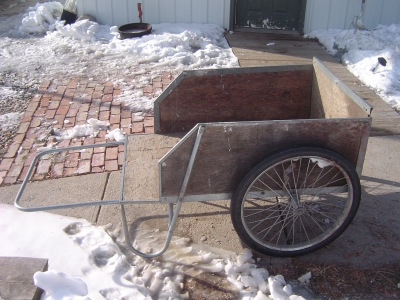 When I was home over Christmas, I got to thinking about the garden cart my parents have had around the place since I was a kid. It consists of two wheels, four pieces of plywood, and some metal tubing + trim. Its construction is far less complex than that of most bicycles. It's easy to load, capacious, and surprisingly sturdy. The wheels are positioned so that the cart seems almost to lift itself when you tug upwards on the handle. It moves easily over broken ground. It stands square on one end for dumping or storage. It's hauled firewood, seed corn, salt, concrete, compost, dirt, garbage, straw, drywall, shingles, sheet metal, tools, chainsaws, an air compressor, lumber, furniture, small children, and nearly every kind of garden-related utensil, product, or refuse.

My bicycle and my parents' garden cart share a lot of basic properties: Simple in form, they also represent millennia of engineering, and benefit immeasurably from standardized tooling. Despite all this iterative history, their specific instances represent individual acts of design and craft. They serve as direct mechanical extensions of the human body's existing powers, don't require any additional fuel, and can generally be maintained by their users with simple hand tools.1 Though each is the result of industrial fabrication and supply chains, it's at least possible to envision handmade models built on the same principles out of local materials.

These are appealing technical properties, but it also seems to me that if there are useful judgments to be made about the moral + ethical content of technology, then they are especially good reference points. Good places to start asking questions, at least.

I'm getting ahead of myself.

I've been a hopeless nerd for most of my life, and I was going through an impressionable age at the manic height of the network-as-revolution 1990s. It's hardly surprising, though regrettable, that I put my friends through at least one phase of vapid claims about how "all social problems are essentially technological". In an important sense, of course, I was right. You can't find a human society without technological foundations, even if a pointed stick doesn't look much like a Macbook.2 I still didn't know what the hell I was talking about, and somebody probably should have slapped me for getting so excited about such a cheap insight.

Some years later, I have a minor role in the technocracy, but I've pretty well lapsed and drifted my way out of the technocratic faith. What I'm left with is a feeling that technology, like geography and climate, exercises a vast influence on the conditions of human life - and in much the same way: In the sphere of technology, there are no incidentals, and the products of immediate intentions aren't necessarily more significant than the products of happenstance, accumulation, and drift. Nor are they necessarily less significant, but it pays to remember that all but a minute fraction of consequences are unintended.3

If this all sounds a bit deterministic, that's probably because it is.

BUT, I'm not trying to suggest that decisions about tech don't matter, or that the work of designers, engineers, hackers, & technical folk in general is just noise. Quite the contrary. I just think that conversations about technology and civilization generally could use a much larger dose of broad context and humility, a bigger and less category-bound sense of how things get shaped the way they do.

So back to two-wheeled utility. The last thing I want is to become an Ideological Cyclist Type. People who will tell you that no one in America has an excuse to be driving a car might be more obnoxious than people who will corner you at keg parties to rant about TV and Wal-Mart.4 What I'd like, by the time I do drift back into the territory of norms and judgments, is to know why tech like the bicycle seems so unusual. I have this suspicion that you could get at a lot of the same things by asking why everyone watches so much shitty television, but possibly I'll do better with happy exceptions than with depressing standards.

Witold Rybczynski, One good turn: a natural history of the screwdriver and the screw (Scribner, 2000).

Henry Petroski, The evolution of useful things (A. Knopf, 1992).

1. Ursula K. Le Guin, in A Rant About "Technology", handles this pretty well.

3. And explicit intentions are scarcely a reliable guide to outcomes anyway. Erik Winn, a friend and colleague of mine, is fond of the observation that the real purpose of computers is to keep people occupied. There's a compatible aphorism in cybernetics, coined by the fantastically named Stafford Beer,3a that "the purpose of the system is what it does". I wish I could remember where I first came across that one, but it was likely the programming subreddit or a blog entry by someone a lot smarter than I am.

3a. I would bet money that at least one third of all the other people who have ever mentioned Stafford Beer in writing use some variant of this tired formula.

4. Does this still happen? I was thinking about it, and apparently I don't go to parties any more or I'd know.