So I drove home for the first time in a month. I pretended to have reasons, but really I just felt the impulse and gave in. Others did the same. I saw my cousin Kylie, drank beer with Jeremy and Nate, had the 4 AM conversation that always comes down or back or sideways from alcohol, government and game theory to knowledge, God, and alcohol.

I came back late this afternoon, stopping on the way to fumble with line numbered BASIC. A former teacher(of mine)'s kid is trying to control a robotic arm for one of those science project schemes you sense is too complicated by half. I wish him luck. He's brighter than me, and eventually it will probably work.

It was strange to step back into that world, the weird highschool technology and science class one where most all the effort is spent on incidental details. Not that much has changed since then, excepting my perspective.

It's well after 1:00 now, and I need to write pages that say something about the Benedictine Rule. I read it earlier tonight, the Rule - it's short, and if my eyes glazed a little and I skimmed the sections on the Divine Office, then it was easy enough to blame fatigue and caffeine. I don't know when to read how many Psalms in what order, but I think I have the gist of things.

This is my opening bit:

The Rule of Benedict and the writings contained in Helen Waddell's The Desert Fathers convey approaches to the monastic life that differ radically in form, yet share a set of values: Contemplation, silence, withdrawal, and self-denial.

And that's almost all I've written, so far.

so i was at home for a while this weekend
and my mom just got a digital camera.
nothing spectacular - a sony old enough to be using floppy disks
it's got the drive built right in

anyway, i played with it
and decided
i want to take more pictures
which is to say
any at all. 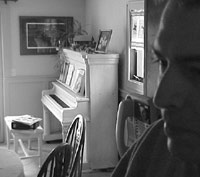 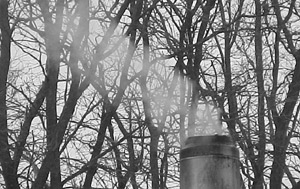 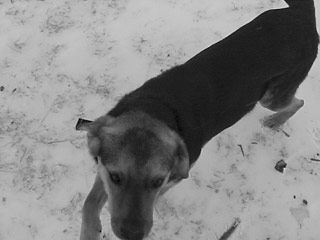 so my copy of under the radar came

and it really is that good

there's an audio cd
seven songs - two remixes, five live tracks
the remixes might be disposable
but the rest is good stuff
especially "gasoline dreams" and "walk with you"

then there's the dvd
i've seen the better part of it before
but it's a lot of material
and aside from some hairy ass-cheeks in the extras
it's pretty much all worth watching
i haven't yet watched it straight through
which leaves me feeling like there's good stuff
waiting there to be discovered, like flipping through
a calvin & hobbes collection years after you first read it
and suddenly you hit the one strip at the bottom of a page
that somehow you have never, ever seen

or like the last two heinlein stories i hadn't read
until tuesday last, drifting through the library basement
feeling empty and deeply down and quite certain
that the last thing i wanted was another book
i stumbled onto the fantasies of robert a. heinlein
and read "waldo" until four in the morning

i feel like i'm reading
things we lost in the fire
london calling
and you'd prefer an astronaut
right now, more than i'm just listening to them over and over.

there was a decorated general with
a heart of gold, that likened him to all the stories he told
of past battles won and lost, and legends of old
a seasoned veteran in his own time

there's nothing original about my belief
that our poets, especially the good ones
are songwriters

but it would be an easy thing to forget
surrounded by bad songs
and worse poetry.

that woman comes to you with her song so sweet
say damn, let the poor sucker sleep