notes in the direction of a larger work

Centuries and decades are liars. All their temporal precision is a front. If we were paying attention, we would realize that what happens, happens in units like seasons and lifetimes, and happens in places. Nothing ever happened in the 20th Century that didn't happen in New York in winter, Berlin at New Years, Kansas during the wheat harvest.

No matter. The easiest insight available to modern historians and science fiction authors alike is that the last most recent span of history, however delineated, has seen more change in the life of the human animal than any comparable period. Take two centuries or half a dozen lifetimes, and try to quantify the change. It literally defies imagination or calculation. How do you quantify the contents of six billion lives?

My great grandfather went to school in an age of horses and steam driven trains. He died years after men walked on the surface of the moon. In between, he witnessed the proliferation of the automobile and the effective death of the American railroad. He was around before widespread indoor plumbing, the electrical grid, interstate highways, and nationwide telephone service. This is a cheap insight, because it is easily repeated.

In wealthy, technologically advanced societies - in places with infrastructure - every pattern of "normal" human life has been altered in some way. Forget cable television or the Internet. The simple fact that most of us no longer spend most of our time and energy producing food and securing shelter is the embodiment and cause of more fundamental change than those of us who have never tried to survive on the products of our own labor can possibly grasp. The predominance of artificial light has probably changed patterns that are nearly as old as life on Earth.

And yet, for most people, the basic problems of life are in a sense what they have always been: Food, shelter, and fucking. These things are often mediated by technological proxies for time, labor, or material wealth, but they remain. The poetic insight that tempers and humanizes a historical sense of change is that much of the content of human experience is universal.

(A third, Science Fictional insight: This last might not always be true. Human nature has been a constant for most of recorded history, and it's damn hard to change - but we're getting there fast.) 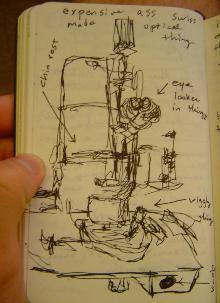 i'd stand there in the kitchen
reeking of smoke and cheap beer
drinking whatever cold liquid i could find
and usually my dad would come out of my parents' room
stand blinking in the light
and we'd talk in low tones —
there's roast beef in the fridge
he'd say
what'd you guys do tonight?

nothing much i'd answer
which was almost always true

somehow in all those years,
i never once felt judged by my father
though god knows he would have had grounds
(and still don't
though i'm guilty as hell
and most days not worth
the paper i'm printed on).

So I'm sitting in a Denver apartment with the shades drawn to keep out the heat, and this frog hops out from under the couch. He looks at me for a while without saying much of anything, and I look at him, and then he makes me an offer: He'll gladly give me "five time-tested themes for use in your next major literary work, guaranteed to be both profitable and artistically sound", in exchange for a bathtub full of cool water and half of my beef & bean burrito. I suspect he might have me confused with someone else, but it seems like a reasonable proposition.

I get out a notebook and make sure my pen is all inked up. I had this dream last night where I just kept trying to fill up the pen, which is blue and leaky and about 35 years old, and pretty soon my bottle of ink had run dry and the pen still wouldn't write and it was snowing all around the helicopter that was carrying me to hell. The dream has left me feeling like I ought to be more sure of my writing utensils.

This is what the frog says to me, more or less:

After I've finished writing that last one down - it strikes me immediately as the most true & relevant - I draw the frog a bath and leave the halved burrito sitting on the soap dish. When I step back into the living room, the frog has disappeared and I can hear it raining outside.