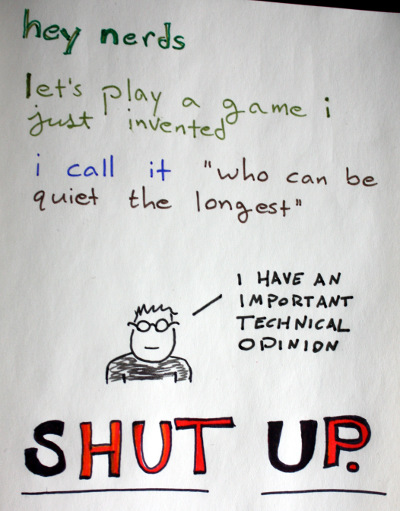 Haiti Earthquake: who's given what?

Is that a compiler bug? 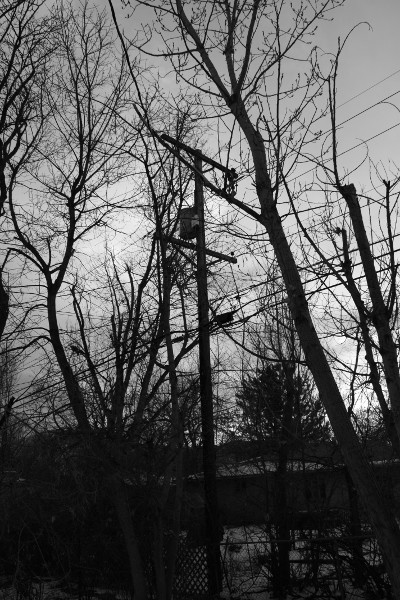 me and sun microsystems

There's some talk about Sun over on reddit. Sun was once an important institution in my life, although I think for different reasons than the ones offered by a lot of commenters.

A bit less than five years ago, I moved to Colorado with an undergraduate degree in history, the next thing to no work history, and a new girlfriend. The girlfriend did childcare and worked in a store that sold vaguely arty junk to wealthy mothers. I got some day labor on craigslist and halfheartedly applied for crap retail jobs. We stressed about money.

After a couple of months, I went to the local office of a (gigantic, blandly evil) temporary employment agency, and they got me some little gigs. I did a bunch of data entry and worked parking at college football games. Eventually, they called me up with an offer of something long term, which (when you're working yourself out of intermittent typing jobs for eight bucks an hour and getting laughed out of interviews) is one of the better things you can hear from a temp agency. I should have failed the piss test, but I didn't, and then I was working in Shipping & Receiving at Sun in Broomfield.1

It was a pretty simple gig. In the mornings, you'd get a bunch of packages and boxes in for delivery to people on-site. You'd scan 'em all in to the system (a FoxPro database running on a couple of Windows 95 boxes, plus some Zebra label printers and Palm handhelds with barcode scanners), slap labels on, pile 'em on carts, and fan out into the offices to drop things off and collect signatures. In the afternoons, you'd invent games with locally available materials and wait for someone to call with an absurd demand involving the movement and/or shipping of something guaranteed to cost more than your annual income and measure two inches taller than at least one door on the most desirable route to its destination.

There were four of us temping when I started, and three of us after Troy the metal drummer got canned for too many no-shows. By that time, we were really fucking good at what we did. I knew the location and employee number of every regular delivery, what kind of stuff it was, how badly they'd want to get it, and who to talk to if they weren't at their desk. I knew who not to interrupt on the phone, who'd yell at me if I didn't, what was supposed to go to a lab instead of a cubicle. I could look at a rack and tell you whether we'd have to take it outside through the courtyard, which elevators it'd fit on, and whether we'd have to put it on a truck instead of dragging it around on a pallet jack. I could maneuver a pallet jack inside a broom closet. I was hell on wheels with a tape gun. We'd stay late most nights waiting on the last pickup, open things up in the morning, go to heroic lengths to get things shipped on time even after the higher-ups told us not to worry about it.

We had approximately the least extrinsic responsibility imaginable, and for reasons I still can't quite articulate, we took it seriously. Right up until Raymond and Beau got summary don't-show-up-in-the-morning calls and I decided to follow suit in the hopes that the machinery might be vaguely inconvenienced for a day or two by my absence.

I was only there for about six months, total, but it has a lot to do with how I've thought about working & institutional life since.2

— Making friends with the delivery drivers. Stealing our stuff back from Facilities when they'd walk off with it. Buying homemade tamales from the ladies who did all the janitorial work. Random bureaucracy everywhere you looked. Shipping hardware to India and watching guys drop off their ancient workstations after they'd been laid off. Little glass-doored offices along the walls, cubicle mazes out on the floor, bizarre little dumb terminals and gigantic monitors all over the place. Listening to guys bitch about another layer of middle management. Dilbert strips and demotivational posters on the walls. Throwing away $100 cardboard boxes. The occasional, quiet joy of explaining to some asshole in a corner office that you weren't allowed to set up his new monitor for him.

— Huge empty whiteboards and dotcom-era coffee stations and people who would still talk about how there used to be donuts every day. Picking up random phones to dial back to shipping and let everyone know you'd just found a stash of food. (There was the reliable stuff everyone knew about, like the guy who was never in his office and always had these huge jars of pretzels, but a fresh bowl of candy or a sandwich platter was worth phoning home about. Sandwiches were like finding money.)

— The time Manpower forgot to pay us for weeks in a row, and eventually sent representatives down with a box of donuts to tell us we shouldn't be talking to each other about whether or not we were getting paid.

— The one security guard you wanted to avoid. Knowing who'd badge you through some door you didn't have privileges for (and who'd just look terrified when you asked), and where it was safe to use the pallet jack or a mail cart as a scooter. Stories about the guy who had set up a whole apartment in a storage closet in building 5, or the way that truckloads of desktop hardware quietly walked out the door when they were first setting up the offices, or how so-and-so had caught this one couple having sex in one of the empty buildings again. How nice it was to just stop and talk to some old dude at one of the front desks. Getting free stuff from the cafeteria.

That's Sun for me. Not their slice of the Unix ecosystem, or Java, or all that hardware (though I sure did lug plenty of it around). Just this weird little corner of the American organizational universe where I was part of the works for a bit. I can't exactly say I mourn its corporate existence, but I appreciate the experience.

(It's pushing 3am as I write this. I will probably revise it when I wake up to discover that it's completely banal and incoherent.)

1. To be more exact, I was making around $8/hr from Manpower, Inc. for labor that in turn probably cost Xerox, who had the mailroom contract, somewhere around $14/hr. I have no idea what Xerox was getting, but I'm pretty sure it was too much.

2. It occurs to me that my chronology is, at best, kind of hazy throughout this piece. It's been a long five years and I drank heavily for a while there in the middle.

headed home at thanksgiving,
i got off the train in lincoln
and as i walked east through the haymarket
a homeless man with no front teeth thought i was
someone named daniel
i'm not daniel, i said, you don't know me
and when he grabbed my arm i shrugged him off
and said leave me the fuck alone
fuck you, he said
and as i walked away he stood on the corner
shouting
fuck you fuck you fuck you you fucking fuck

"A lot of things have to go right all at once."