notes for the next time you launch a high-altitude balloon

So we launched, tracked, and recovered this balloon yesterday. It was kind of haphazard, but we got the payload back and we learned a few things. The most obvious thing, of course, is that projects like this are going to work a lot better if you do your preparatory work weeks in advance instead of the night before while drinking beers. We'll take that as read; here are some notes about the rest of it.

1. A notebook is a good idea. You can run through a pre-launch checklist, keep a log, jot down coordinates and times, all that sort of thing. It's guaranteed not to lose power, and it's a good record after the fact.

Of course, if you've brought a notebook, you should remember where it is so you can actually use it for the duration. I screwed up on this one.

There's a more general point here: It really helps to know where your tools and supplies are. As with the things in your wallet or the tools in a workshop, you'll be vastly more effective if you can go right to a designated location when you need something. If it's not on your person, put it back where it's supposed to live. If it's supposed to be on your person, keep it on your person. Whatever it is, don't just set it down or toss it onto a car seat.

(Digression: Like the tech industry dork that I am, I own a couple of varieties of Leatherman Tool. The little one on my keychain that unfolds into a pair of scissors is way useful, and there's a good argument from utility for having the multitool stashed in a bag, but yesterday reinforced a nagging thought I've been having for a while: The item you want in your pocket when stuff is happening isn't some 27-function monstrosity that caters to your inner 6-year-old's Transformers nostalgia; it's just a knife. A reasonably sized, locking folder with a sharp blade you can open one-handed.)

Mid-setup, I had to run and borrow a crescent wrench from a guy at a nearby auto shop. He didn't have to think about where the wrench was. He just opened the right drawer and took it out without even looking. That guy is good at his job. Which brings me to...

2. If you're connecting something to a tank of helium, there's a pretty good chance "hand tight" isn't good enough. Bring a wrench. More generally, that impulse you have to throw a toolbox in with everything else? It's a good impulse. Listen to it.

3. The wind will play merry hell with your best intentions. As with most outdoor undertakings (cf. frisbee, bicycling, roofing, things involving tents), the wind will make you hate your life. I keep hearing that people who do this regularly are obsessive about the weather and launch from places where they can be shielded from the wind while filling the balloon. Now I know why.

3a. A Bic won't work for shit in the wind. Everybody who's ever tried to smoke anything or start a fire with a breeze going can probably appreciate this. It's also a problem if you're trying to melt an end of nylon cord to keep it from unraveling. Next time I'm going to bring a "windproof" lighter, if I can find one that actually works.

4. An adult should know how to tie a variety of knots. I don't. It's kind of crippling. I should get a book or something.

5. Multitasking causes pain. We filled the balloon in parallel with the final steps of prepping the payload, laying out line, etc. Doing these things one-after-the-other would have saved us a lot of hassle.

6. Power and network are key during the tracking phase. We did way better on this front than the first time around. I brought a spare phone battery I didn't wind up needing, and we had two new-ish laptops with decent battery life. We didn't go out of cell service much, Dave was able to tether with his iPhone, and we had a paper map for fallback navigation.

All that said, we still wound up fighting with a crappy inverter plugged into Dave's 4Runner's inadequate electrical system via cigarette lighter, and missing a battery for the tracking radio. Next time around I want to build a serious power station, preferably one that'll work independent of the vehicle's electrical and charge from a solar panel mounted on the roof. I also want a bunch of map data stored on the main computer.

7. There's software for this stuff. We were using dl-fldigi to decode tracking data from the payload. It worked pretty well, but if we'd put in more time on it pre-launch, we probably could have had it plotting coordinates directly to an offline, don't-need-no-network map.

8. Detailed paper maps are a good idea. We didn't strictly need it this time around — but I was glad it was there, and I won't do this again without one in the car.

9. Navigating from a cellphone-sized display sucks. And all of the software both of us had on our expensive, overfeatured smartphones was totally useless when it came to the simple task of taking a lat/long and pointing us in the right direction. It was a good reminder that the tools you use to stumble your way home post-party or find a restaurant in town are built on assumptions that just won't hold out in the field.

10. One more person would make a world of difference. Two people are easily enough to launch and track a balloon, but an ideal setup would have had us with one to drive, one to run the radio tracking setup, and one to navigate.

12. I should never forget the stuff I learned about the outdoors when I was 8. We wound up striking off on foot across some dude's pasture to find the payload. I forgot water and a hat. No big deal this time around, but it was dumb.

We did take the time to knock on the nearby farmhouse door, since there was a nearby place, and although nobody answered, I'm pretty sure it's usually the right idea. Country people aren't generally gonna begrudge you crossing their fences, but they'll probably appreciate if you stop by to ask and they tend to know useful stuff about the landscape. 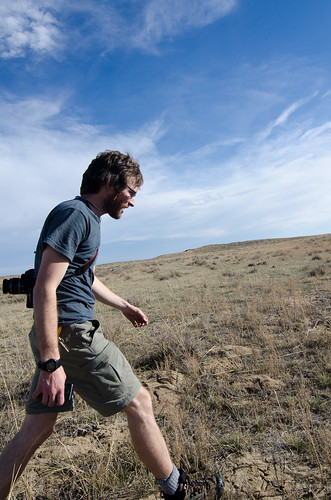 13. Finally, those pants that unzip above the knee to become shorts? They are a fashion disaster.