Well, our domains are back. Unfortunately, everything is really broken in several ways that I don't yet know how to fix. (At least three Apache configuration issues and MySQL access is all jacked up.)

On N. 27th Street last night as Jon drives Seppo and I back from dinner at Sinbad's (chicken kabob, rice, bean soup, hot tea), a rust-eaten pickup with no muffler and a shattered windshield. Stickers in the left and right corners of the back window: Calvin urinating on, respectively, the words FOREIGN SHIT, and PETA. Driver laughing and grinning as he repeatedly guns the engine and passes us in a cloud of exhaust smoke. Fat girl in passenger seat looking happy.

Today, my Aunt Kathy sends a form letter (most likely composed by my Aunt Constance) that my Grandma once filled out. 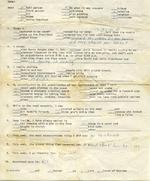 Going all freeform with the layout here, having decided that Internet Explorer's supremely lame inability to deal with max-width directives should not be my problem. I grant that I am sacrificing some elegance of presentation by forgoing the Javascript hack necessary to make this page render in approximately similar ways in both IE and those browsers which don't suck.

p1k3.com and its sister sites may flicker in and out of existence over the next few days. We're moving to a new server.

Saw Coffee and Cigarettes tonight. A fine picture, on the whole. Meandering and uneven, but as good a portrait of a certain kind of social awkwardness as I have seen. I thought the best segments were "cousins", "cousins?", and the one at the end with the old men I felt I should recognize and the Mahler song.

Have been reading the journals of Thomas Merton, very slowly. I'm at once fascinated by his view of life and bothered by his intense devotion to the Church. I keep hitting referents and thoughts I should take the time to follow up on - or register my disagreement with.

last night pulling onto 180 to go the three miles home
i stopped for a couple kids who had murdered a tire on a
curb somewhere, and let them destroy
my shitty manufacturer-supplied jack
trying to change it

closer to awake,
and i might have been more use
or i might have just kept going
in the first place
as is i guess, it was just
an intersection with someone else's bad night
and i hope they got where they were going
but it left me again
with that old thought that life is a series of tests,
right, and each one is a gateway to some kind
of possibility
a door you're stepping through, or a vastly connected node
on a branching graph of potential collisions —
move in the direction of why not?
court the instability of abandoning worn-in experience
(like a bike tire jumping a rut)
and things happen.

August is the month of unfinished thoughts. 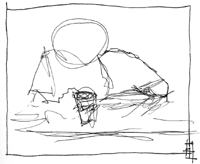 Not long ago, I rode along with Craig (who is tall and runs fast, and also plays bass) and Eric (who is not tall, but is fast whenever the mysterious, random workings of his brain chemistry dictate) to a free 311 concert in Omaha. We collected a set of Craig's dorm-friends somewhere in the generic housing that has accreted on the outer layers of the city, and headed for Memorial Park. There were a lot of people in Memorial Park. About half of them must have been in the fifty square yards closest to the stage. We worked our way as far forward as possible.

I lost track of Eric and the kids whose names I didn't know immediately. I think I knew where Craig was until somewhere in the second song. I know he was around until after the part where our section of crowd collapsed en masse, because I remember that we both helped the same panicked looking fat guy to his feet. Or maybe he wasn't fat, but if he wasn't fat, he was dense. I remember heaviness. After that, it became crazy and my mind was running on nearly independent parallel tracks: The one that mechanically avoids being trampled to death, and the one that repeats phrases like "oven of madness" and "my life needs some intensity of experience".

It is a bad idea to carry glasses into a mosh pit. Even in your pocket.

a stack of thoughts cropped from recent ink & paper — it is unreasonable to be angry that people do not understand the mechanics of a particular technology — joseph campbell is interesting but there are problems with the broadness of his assertions about myth and religion — it would be easy to lose the pursuit of knowledge in the vehicles of that pursuit – which applies as much to pen and paper as to cursor and buffer — it is often possible to detect genuine racism (for which term substitute any kind of illogical prejudice) in the least expected places — i wrote terrible code when i was 16 – possessing the proper tools is necessary but not sufficient for the completion of any task – or is it? — some things really are never going to be the same again – vagueness is not always an impediment to meaningfulness – nevertheless, i should start exercising my muscles for the concrete and specific

Moved to another part of town, started working in front of glowing boxes part time.

Woke up this morning to discover that I'd missed a three hour keyboard-and-bass jam session, a pot of sweet corn, and Jono severely burning himself.