trying to escape
the sense that i am not
a very good person right now
but every time i think i'm
gaining on it
i make some decision or take
an action.

trying to decide what
trajectory my life has -
a long curve interrupted
at intervals by the plotted path
of some drunken insect, battering itself
to shreds?

trying to strum chords,
my fingers miss the strings.
this is not a metaphor,
but it may easily be viewed
as a symptom.

wherein i swear a lot

I played Ultimate last night, as per Thursday usual. Spent the better part of the game thinking maybe I ought to just give up the sport, walk away and let my body return, as it so clearly longs to, to a state of near-total uselessness. Every dropped disc, stupid throw, and incompetent reading of field position felt like something was whispering at me -- Why don't you know better by now? -- building up to a scream -- What the fuck are you doing?

Eventually I realized that I was letting the random, shit-talking arrogance of one person play hell with my game and my general mental state, and things started to improve. I stopped making quite so many stupid mistakes. By the final point I had shaken off most of the self-loathing, or at least forced it back into the darker corners of my brain. I knew that I would keep playing, and that if I was tired of sucking - well, probably I would just try to get better. Weird that this game can mess with my head so much? Maybe.

I think rage and bitter recrimination, self-directed or otherwise, are habit forming drugs.

I was watching the Fox News coverage of the Democratic National Convention the other night. Bill O'Reilly and his ludicrously titled "no spin zone". I kept thinking You completely loathsome fuck. I wanted to hurt something in response. Something self-assured and wealthy and destructive and hideously complacent. I could see the entire impervious wall of self-reinforcing radical-conservative-whatever-it-is bullshit right there in O'Reilly's fatuous, self-satisfied face, and I wanted to smash it.

And about then I had the minor epiphany that I just wasn't having any fun at all. And I really started thinking about this. It's not any fun hating people like Bill O'Reilly or Ann Coulter or James Dobson. It's really not. The rage is addictive, but it's completely unfulfilling. All it does is eat away at the channels of your reason and empathy, feeding the sick machine that sustains these people - your hatred is infinitely preferable to your indifference, vastly more nourishing.

I turned the TV off.

I'd like to note the semi-integration of Brent's Wala script into the p1k3 engine. This was easy to do because the Wala code is clean and well modularized; I added maybe three lines to my existing display.pl.

What this means is that it's a little easier to leave a comment, and I'm going to roll anything decent in the current wiki over to the new system. Also, inspired by Electrolite, I'm using the Wala as a linkbar for interesting stuff I come across. Sort of a microblog to absorb the "ooh, shiny!" impulses that would otherwise clutter a lot of my entries. It's wide-open for editing, so you could deface my front page in all kinds of ways, but I'm not going to do anything about that 'til it actually happens. Feel free to add anything you think I should read, listen to, etc.

I'll probably be tweaking this for a while, and there will likely be some interruptions in service, but I swear this is the last time I'm going to talk about it here.

Is "modularized" even a word?

A Saturday or two ago, I drove to Peru, Nebraska to see Molly. She was watching little kids at an annual Bahá'í summer school at the state college there. It was the last night, and so there were small children on a stage singing. There was something very Vacation Bible School about the whole thing, and I said this to Molly, and she said, You're going to write about this, aren't you?

Via Boing Boing, these examples of computational art are the sorts of things that Flash and Java applets are really good for. Beautiful.

Conversation last night with Alan about, among other things, the unexplored possibilities of visualizing information. We have so much computational / visual power at our disposal, and such a vast store of meaningful, interconnected-but-discrete data.

Imagine mapping Usenet, or Wikipedia, or scraping JSTOR and mapping citations in all the journal articles for a given discipline to some kind of three- or four- dimensional space. It's enough to make me wish I knew stats and graph theory.

Today, while filling out a yellow single-page application form at the Barnes & Noble on O Street, I think: If I am ever in a position to influence the hiring practices of any corporate entity, the first thing I will do is write my own application form. It will contain the routine invasiveness, because I'd be looked at like some kind of raging lunatic if I suggested that potential employees be evaluated on a basis disconnected from their Social Security Numbers. It will, however, feature one significant deviation from the norm. There will be a large blank space, perhaps as much as a full page, and instead of the boilerplate about listing skills and extracurricular activities, it will say:

Should you be unable to present an impressive work history or a set of institutional and personal affiliations which neatly demonstrate the ill-defined but all-important quality of employability, and should you nevertheless feel that you are in fact a useful person, capable of doing useful work, despite the tremendous handicap of your inability to reduce this usefulness to a set of straightforward canned responses, please use the following space to explain yourself. Do not bullshit us, and we might hire you. We promise we'll at least think about it.

Managers will be instructed to give serious consideration to responses.

Yeah, I know this would fly like a brick.

In case anyone's wondering, I sort of let p1k3.com (the domain) expire a few days ago. I've paid Verio (or rather Melbourne IT, who actually handle Verio's domain registration stuff) the requisite extortionary fee, so once the DNS servers of the world catch up things should be back to normal. If you've tried to mail me anything since midnight Saturday, I probably haven't seen it. This means that you should mail me again, because I am perpetually desperate for human contact.

If you're in the market for a domain name, I'd like to point out that Verio suck and you should not give them any of your money, ever. Myself, I'm going to transfer to Tucows or someone similar right quick.

was going to be an essay on photography: notes thereto

today i got my pictures back from europe.
mostly, they suck. this happens for two reasons
— using low end equipment, and using it extremely
carelessly. 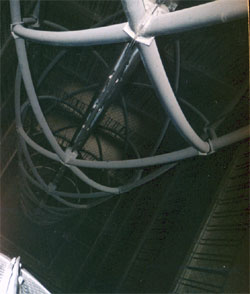 i can't make any legitimate complaints
about the equipment - i borrowed my sister's
$20 wal-mart special. i don't even own
a camera. but i really should have paid more
attention to what i was doing with what i had.

what underlies this relentless
self documentation, anyway? 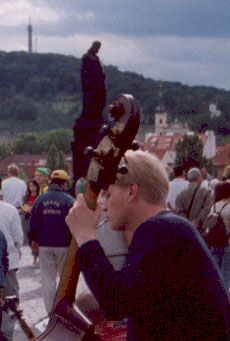 and have you ever noticed how the
middle part of the book, the one with
all the grainy too-small b&w pictures
of things you've been reading about
never lives up to the text? 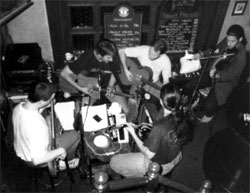 is that important?
i think it is.

photography (as practiced) is
bad at documenting the
inner life.

and bad at
capturing the sense impressions of a place
or time. it takes a singularly skilled
photographer to bring out the things
that strike the eye and brain. 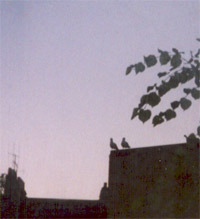 it also takes good equipment and luck.
even then, the things that hit us
about photographs are often a perspective
unique to the machine. 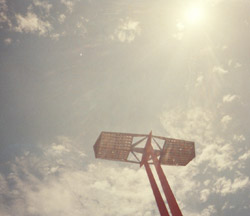 much as i might regret my failure
to take good pictures, it might be
observed that time behind the varied
engines of artificial visual memory
is often time that might be better spent
in a moment than
in trying to crystallize that moment. 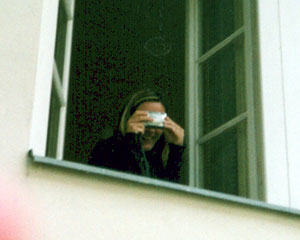 I would like to take a moment to observe that Packs A Wallop is really damn funny.

Those interested will find some new things under June. Mostly image sorts of things, but there will be new text as well. I will note that the production of even modest graphics is far too time consuming, but also enormously satisfying for some reason.

Monday at the coffee shop,
Sarah has a little bunch of roses.
Throughout the conversation, she
slowly dismantles the flowers.
I draw a piece. So does Sarah. 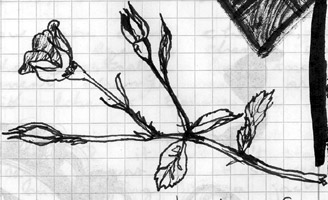 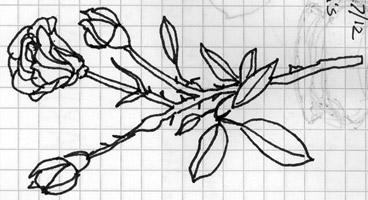 when we get back to the house,
there is a hedgehog moving slowly
along the wall by the door
it is spikey and round
with small black eyes.

in prague, we stay at a baptist seminary:
simple buildings, cobbled courtyards, a fountain, trees
all around and a stream below the kitchen window

some of it is beautiful because of these things
regardless, the street vendors
sell postcards and dashed-off paintings
of nearly empty squares and bridges —
the muddled, slowly churning presence of
humanity considered as usual
a distraction

i also realize that i feel more reverence
in a tiny wooden church barely a century old
and unlikely to last another
than surrounded by this vast, deliberate
magnificence and all its strange accretions

perhaps it is only a function of tainted sound
and lighting — distractions again
here, people point and talk
(we listen to a spanish tour guide
"is fourteen catorce?")
and there is the constant flicker of flash photography

still i could stay an hour, or a day.
something in all this structure draws
me and holds my mind, usually so inconstant

another day, we leave prague behind to find
an ossuary chapel decorated in strings of human skulls
we buy tickets at the door
"you are entering a pious space.
please conserve respekt for the dead."
on one wall a patron's coat of arms
has been rendered in bone;
in the lower right quadrant a bone raven
is pecking the nonexistent eye
out of a "turkish" skull
wearing a bone head dress.

afterwards we wind further into the
countryside to a little bluegrass festival
where to our great fortune
the rain has killed the electronics
and the music proceeds with no amplification at all,
czechs singing "rollin' in my sweet baby's arms"
everyone wants to get themselves a little authenticity

later
around the kitchen table
we talk late over salted cheese
and coffee mugs full of beer
about governments, education,
oilfields, empires, and the things of the world

the next morning i wake up
and it is the fourth of july.

Meanwhile, back in the Americas, I've got a new cousin. Her name is Norah. Someday, I imagine that she and I might have a conversation that goes something like this:

B: The last time I saw you, you were only this big.

N: Who or what are you, anyway?

Norah, I apologize in advance. It's genetic, I think. Happy birthday, and welcome to this vale of tears. Try not to give your mom as much static as she gave hers.